I've had a chance to think about Thanksgiving this year, what it is to be thankful, and what I am thankful for.  Yes, I am thankful for family and health and that my family and friends are healthy and that they have jobs and homes and wonderful families of their own.  But I am so very, very thankful for those tiny, sparkly things called beads that came into my life when I was three years old.

Right now I'm in transition, searching and negotiating for a new location for the store.  I have boxes of stuff everywhere in my house and some might look at this and wonder how can anyone be grateful for such chaos that is going on.   But, it really is about what beads have brought into my life.

Because of beads, I am more joyful.  When Bead Street was located in downtown Boise, many of my customers were local - many from the north end and  because of the location, many tourists visited as well.   I met Barb - who has become my best friend and traveling companion - who lives in Portland.  I can't tell you how much joy and fun and creative energy she has brought into my life.  And because of Barb, my traveling experiences are a little less structured and less organized.  Yes, I do that everywhere.

Because of beads,  a life was actually changed - for the so much better.  A trip was planned and the day before, my employee quit.  A friend volunteered her daughter to help me out.  This gal decided she liked working for me and continued on.   One day one of my customers actually spent some time talking to her, and then helped her get her GED and then into college. This was the start of her transition and remarkably her life has changed dramatically.  Believe me.   You pundits might say that would have happened anyway.  Maybe, maybe not.

Because of beads, I am more creative.   When we moved to Cole and Ustick, we were discovered by many new customers that I have grown to love.  These people have been so inspirational, so knowledgeable and so talented.  My creativity has flourished because of them.   I am so thankful they are a part of my life.

Because of beads, my family is larger.  I met a vendor that has now become a big part of my family - they have now moved to Boise so I get to see them on a regular basis.  How I met them is a long list of 'coincidences' that happened in a particular order.  If any of those 'coincidences' had not happened at the right time - or even in the right sequence - I might not have met these people.   I am so, so very thankful they are a part of my life.

Because of beads, I have learned so much about the rest of the world.  I learned to blog.  And because I am blogging, I have followers and those followers have left me some wonderful comments.  I have  learned something about someone half way around the world - and about their country.  My passion for travel has been re-ignited and I have become more adventurous.

Because of beads - I am.  I am so thankful to live in this time where we can reach around the world and get to know someone.  Because of the Internet and Gloria Google, the language barrier is breached.  Just copy and paste into Google translate and viola' - I now know something about them. We can actually speak to each other and  because we bead, we can share our beading projects with anyone in the world.  Amazing!

Because of beads, many of you have discovered your own creative spirit and want to share your ideas.  For those of you who have some extra time this Thanksgiving, here is a free pattern for this beautiful bracelet.  Thanks so much Eva! 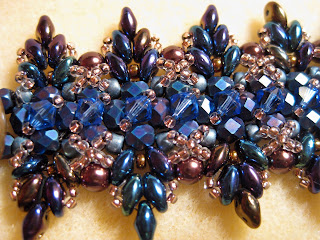 Because of beads,  my life is better.   I am smarter, more knowledgeable, more grateful, more creative and  life is so much more fun.  I am so thankful my grandmother introduced them to me.  And I am so thankful they grabbed me by the heart strings and didn't let go.  I hope all of you have a wonderful day.  Happy Thanksgiving!

Have more to tell you about the Paris Flea Markets but I also still have tons and tons of photos to go through.  So thought I would tell you about a couple of bracelets I have been working on.  First is a bracelet influenced  by a design by Ella Des of Ellad2


Another pattern I have been playing with for a while now is my Czech SuperDuo bangle.  Trying different combos, adding other beads, I have even incorporated some of my beaded beads into the pattern.
﻿ ﻿﻿﻿﻿﻿ ﻿﻿﻿
﻿﻿ ﻿﻿
Posted by Eileen at Friday, November 16, 2012 6 comments: 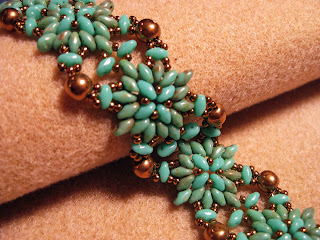 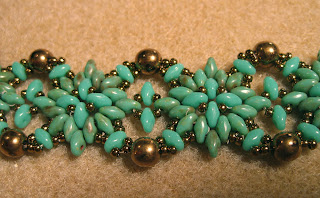 Well it's the weekend and time for the Paris Flea Markets.  I have a separate post on two that we attended - with lots of photos.  For now, here is a bracelet inspired by the Eiffel Tower and details of Barb and Jimmila's great adventure. 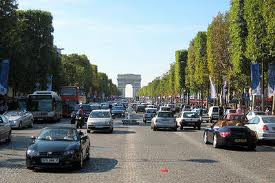 
﻿
﻿
Remember I said my job was to navigate - to get everyone where they need to be and then safely back home?  Well, I wasn't along and they got lost.  On the street, trying to read a map in the dark, not knowing what street the apartment was on, they tried to ask people if they spoke English.  Barb did find someone who spoke Spanish - so they communicated some that way - go figure - in Paris!

Now standing in front of a bookstore, still trying to figure out where they were, they heard this voice that Barb said sounded a lot like Maurice Chevalier.  He asked - Can I help you?  They told him they were lost and trying to make their way to the Moofart street market.  (The name is Mouffetard but I had pronounced it Moofart on the first day, and unfortunately it stuck.)

He said, "If I help you, will you give me a little kiss?"  Barb replied, "If you help me, I will give you a BIG kiss".   Needless to say, they made their way home safe and sound.  And they won't tell me anymore about this Frenchman, who they now refer to as 'their  bookseller'.