In 2010, at the Puget Sound Bead Show, everywhere I went I kept seeing these wonderful crocheted bracelets.  So, after the show, I spent the entire summer trying to learn how to crochet so I could make one.  Well, it seemed I did okay until I went to bed and then I forgot everything I learned.  So I tried again, and again, and again, and yet again.

Finally, I realized that I could do almost the identical look in tubular peyote.  Then, if I used different size seed beads ... oh my gosh ... I could make these fabulous undulating, crochet looking things, and I didn't  even have to know how to crochet.  It wasn't until later that I discovered that this technique was called a Cellini Spiral and it has become one of my favorite stitches.

When Barb and I traveled to Florence, Italy in 2011, we ran across the bust of Benvenuto Cellini on the  Ponte Vecchio bridge.  Cellini was a great jewelry artist and sculptor.  Barb does not have fond memories of this bracelet.  In fact, for some reason the mere sight of this statue  brought tears to her eyes.

I, on the other hand, love this stitch and even like beading them on trips. I only need to take 3 or 4 tubes of beads, a needle and thread and - since it's the same stitch over and over - long plane trips become much more tolerable.  So here are some of my favorite completed projects (as well as examples from others). 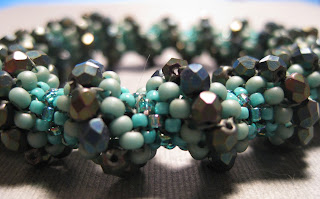 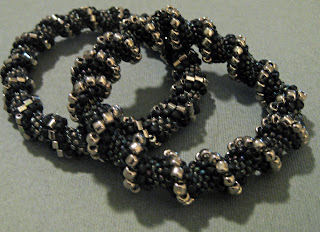 I love blacks, so had to make two. 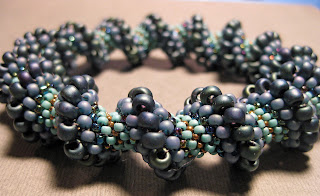 I love teal and turquoise even more -
so actually have three but didn't
have photos of the third one. 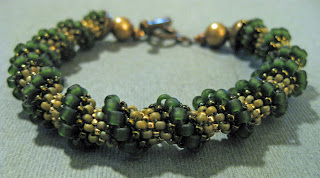 This one belongs to Jennifer and she made
her's thinner with a size 8/0 as the largest bead.
Notice she used a clasp instead of creating a bangle.


If you would like to try this, here is a great pattern by Elena Nazarchuk.  I couldn't get the link to work on my tablet (remember I'm traveling) so am just putting this here for now,  I also have a video - with same problem - so will not add that now but will fix both of these later.


A pattern  by Elena Nazarchuk 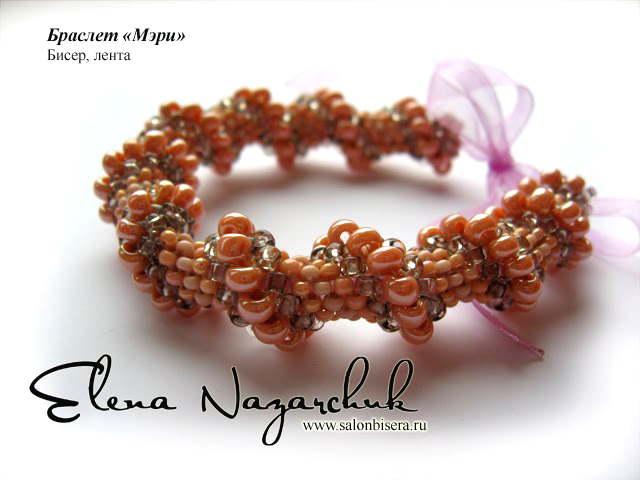 I'm traveling at the moment but wanted to post something to let everyone know I survived the move out of Cole and Ustick.  Actually I just barely survived, catching a really nasty cold made worse because of all the smoke in the valley and the dust from the move.

And, I am without my computer, printer, Photoshop, camera
cards, calender - basically all those items that I use to post - so please bear with me if I have misspelled names or even incorrect names under a post.

Nicole took a class at Bead and Button this summer learning a Triple Spiral technique.  She finished her necklace and it turned out beautifully.  Don't you agree? 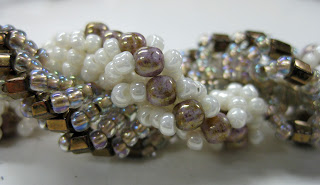 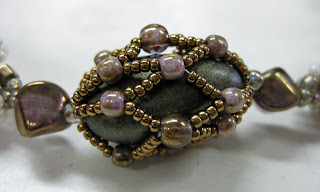 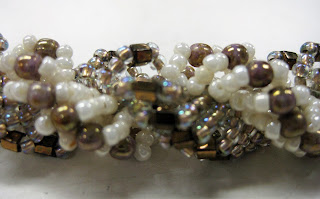 Virginia took a class with Nancy at Bead Street some time ago.  She must really love this stitch - because she keeps making more.  Here is another one of her finished necklaces. 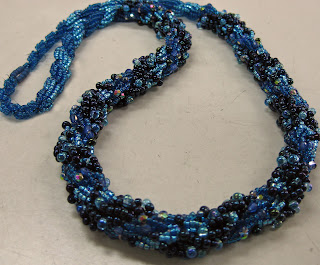 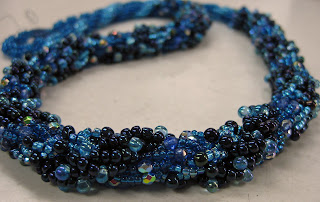 Masoumeh also attended Nancy's class and instead of doing an entire necklace with this stitch, she added an area to a tubular piece she was working on. 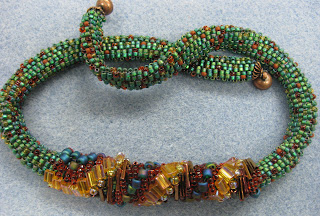 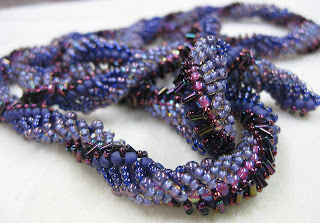 I think this is one of Nancy's projects﻿
﻿
Nancy  originally submitted instructions for a triple spiral project called 'Sumptuous Spiral' and was published in Beadwork Dec 2006/Jan 2007.
Posted by Eileen at Wednesday, September 26, 2012 3 comments:

The Cole and Ustick location has been closed for Boise City required renovations.  Some inventory has been moved to the warehouse and some inventory is currently being moved to a temporary location.   More information later.
﻿﻿
﻿﻿﻿﻿
﻿﻿ ﻿﻿
﻿﻿﻿
﻿﻿
﻿
﻿
﻿﻿
﻿
The good new is that we will have new - brand new - never seen before beads.  Very exciting!  An online shopping cart has been completed and is  currently being tested.  And new, Paris and Italy inspired classes are in the planning stages.  For those of you who like to be on the leading edge of new beading projects - you are in for a treat.

Many thanks to EVERYONE who helped with the move.  In particular, Sandy, Sue, Telli, Irene, Lucy, Nicole, and Noah, Adam and Tyson from Carter Construction  were a tremendous help with this project. I also appreciate  their great ideas and for just jumping in wherever needed.  Thanks so much.

Saturday, September 15th,  was the last class held at Bead Street's Cole and Ustick location.  Penny had the honors and a packed house for her Netted Wire Cabochon class.

Some gals wanted to do a little more work with their projects so more photos coming soon.  Because it was our last weekend at Cole and Ustick - we were very, very busy and I did not have a chance to watch what the gals were doing.   If the caption under the photo is incorrect,  please let me know.  Thanks Penny, for another great class.
Posted by Eileen at Friday, September 21, 2012 1 comment:

More great photos from Bead Street customers.  Janet has been very busy lately, trying some new things as well as adaptations of projects from prior classes.  Here she has worked with a lot of pressed glass - daggers, drops, farfalles,  and leaves.

Saturday, September 15th is the last day of Bead Street's Moving sale.  More information about a new location will be posted in the next couple of months.

Included in this sale are the 4 by 7mm Long Magatama drops.  And about a dozen new colors in Sherbets (think sorbet, frozen yogurt with berries), matte pastels and matte metallics.  Here are some ideas and a couple of tutorials on using them.
﻿﻿﻿
﻿﻿﻿﻿﻿
﻿﻿
﻿

﻿﻿﻿
﻿﻿﻿
Here is another free pattern for an Embellished Ladder Stitch Bracelet using these Magatama drops  written by Amadeuslila and Zuzzl.
Posted by Eileen at Saturday, September 15, 2012 6 comments:

When I was young, my Grandmother  taught me how to tie knots in cords to make jewelry.  I can’t remember whether we were doing macrame or just something similar.    We’d put our feet up against the coffee table in the living room, 'safety pin' the ends of cords to our pants - somewhere around the tops of our knees and spend hours weaving cords over and under, back and forth around a shoe lace.

This Macrame and Ladder Wrap bracelet is reminiscent of those projects.  A lot prettier here - because of the gorgeous colors of C-Lon Macrame Cord - but very similar to what we did in the 1950's.

If you would like to try this project, now is the time.  All of the materials, except for the leather, are on sale right now at Bead Street.   Click on Videos on the top navigation bar to see a how-to on making a ladder stitch bracelet if you are unfamiliar with this technique.  Add macrame' knots in between each group of beads to create your own version.
Posted by Eileen at Friday, September 14, 2012 1 comment:

Bead Street is moving.   A major renovation is currently scheduled and we were told we needed to move out while this is being done.  Because of this and an ongoing "lack of space to do more classes problem" -  we have decided to not move back into this location. We will be closing Saturday evening the 15th and relocating to a bigger space.

Our last class will be Penny's Netted Wire Cabachon on Saturday and we still have a couple of seats still available if you are interested.


﻿
﻿
Classes will resume sometime towards the end of October.  They will be posted here, so please keep in touch.  Becoming a Follower is an easy way to do that.

Since we do not want you to run out of supplies - we are having a great sale this week, which will end on Saturday.

The new Beadwork magazine just arrived which has many Tila - CzechMate  projects included.  Both the magazine and the beads are on sale, so if you wanted to try some of these - now is a good time.
﻿﻿﻿
﻿﻿﻿
We have some metal stamping sets and metal hammers that would make a great gift for someone just starting with metalworking or wireworking. Some Hemp, a Macrame book and a package of beads would make a great Christmas gift for a teen.  We have one Glass Beadmaking kit left as well.

And of course, if you know of projects you will be doing for the holidays - I encourage you to take advantage of this sale and stock up now.  More information on the move coming later.

Not your Momma's Macrame

Shamballa Bracelets are one of the newest trends around. These macrame bracelets were inspired by the ancient philosophies of Buddhism and Tibetan which believes that the earth contains and also transmits powers via precious and semi-precious gemstones.

The idea behind these bracelets posits that along with  yoga, and meditation, they can play a  role in promoting your health and fitness.  Whether you believe in this tradition or not, they make beautiful and contemporary jewelry. 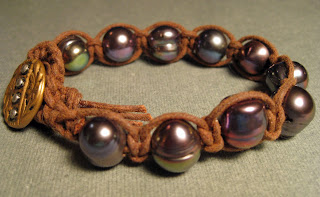 Bead Street has a selection of large hole glass beads and large hole freshwater pearls that look beautiful with leather.  We also have a large color selection of 2mm leather.

For those of you old enough to remember the macrame plant holders in the 70's - you already have the skills to make this.  For those of you that are younger, check out this video.


Here is a photo of another macrame bracelet using C-Lon Macrame cord and the new Matsuno Peanut Beads.  A Peanut bead was added to each end of the cord before tying the knot.  A great antique button was used to close this one.